Wind Energy is air movements which are created by the uneven heating of the earth's surface by the sun, and compared to traditional energy sources the effects of this alternative energy on the environment are relatively minor.  Unlike fossil fuel this energy creates no pollution, and no green gas emissions.

For hundreds of years wind power has been a very useful resource with the propelling of sailing ships, windmills for irrigation, and the milling of grain being some of the earlier uses.

Windmills for water pumping were used for allowing farmers and ranchers with vast areas, and no means of accessible water to irrigate their land.  These wind pumps were also used to drain wetlands and for pumping water from wells, to supply Steam Locomotives.  In the late 1800's, the first large wind powered machine that could generate electricity was produced.

Wind Turbines since then have become more modern and efficient and are becoming widespread in many areas, with the small wind turbines being used for generating electricity to  homes or small farms, while the bigger wind systems are used in Wind Farms and bringing power to thousands of homes and businesses.

The big scale wind turbines require more land than the residential ones, and they must be positioned in a location with a fairly good amount of wind blowing.  Wind speed, and direction all play a role in how much Wind Energy will be produced. 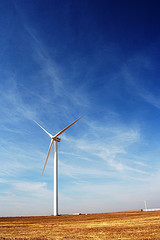 Wind Turbines operate when the force of the wind rotates the blades which  are connected to a main shaft that turns a generator creating electricity, and then this wind power can be sent to a sub-station or battery storage.

Residential Wind Turbines being quite tall should be thirty feet (9M) above any surrounding objects, and within a 250 foot (77M) radius.  They are usually mounted on steel towers and have either two or three blades resembling airplane propellers.  It is advisable to have at least one acre of land, and the wind turbine should be situated where there is at least a wind velocity of no less than 10MPH.  It is best to find out if the Local Laws from the City or County might prohibit the use, or placement of these wind systems.

Isolated communities that rely on gas generators may use small wind turbines to save on fuel consumption, and in remote areas they can be used with battery storage to create power for their homes.  Another use is to run low-power equipment, like parking meters or wireless internet gateways.

Also quite a bit of money can be saved on your household power bill by combining Wind Energy and utility.  This is done when your wind turbine is generating energy, and your utility is shut off,  but when there is not enough wind to power your turbine, your utility will kick in and take over.  Some utility companies will also buy any excess electricity which your turbine produces.

As with any new form of energy, or new technology, Wind Farms concerns are that they are noisy, and are harmful to humans and animals.  Visual impact is also a concern as is the danger to birds and bats.

Many people living close to Wind Farms are usually positive about Wind Energy, and thousands of people that visit these Farms say they can't believe how quiet and beautiful they are.  For all the wind turbines installed in the world to date, there are no known incidences to warrant any concerns for the welfare of humans and animals.

To-days modern Wind Farms sites are addressing the threats to birds and other forms of Wildlife, and  they are closely monitoring this issue with also working to avoid this threat.

Wind Energy being clean, environment friendly, cost efficient and inexhaustible, is fast becoming one of the greatest energy this World will ever have.  And let us not forget other benefits like job creations and tourism.  In the future we are going to hear a lot more about this wonderful energy resource.

For more on Wind Energy return to Global Energies 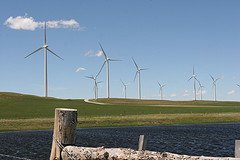