Fuel-Cells using the power of hydrogen with pure water and useful heat as the only byproducts are pollution-free and have twice the efficiency of traditional combustion base technologies, according to the U.S. Department of Energy.

A catalyst (a substance that affects a chemical reaction, but itself remains unchanged) is used to split hydrogen into protons and electrons, the electrons travel through an external circuit creating an electric current, while the hydrogen ions and the electrons react with oxygen to create water.

Hydrogen is a colorless, odorless, tasteless, non-toxic, combustible gas, which exists on earth in molecular forms such as water and organic compounds. Recent applications for hydrogen are found in the automotive, chemical, power generation, aerospace, and in the telecommunications industries. 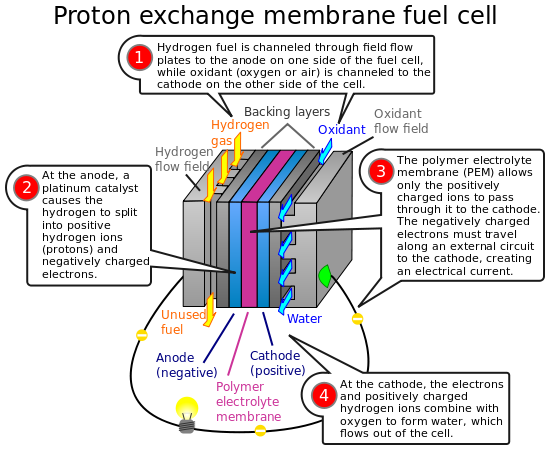 In rural areas they can be successful for large-scale energy storage. And  being compact and lightweight these systems having no moving parts, and not involving combustion can achieve up to 99.9999% reliability, if ideal conditions are met.

Most stationary power generation application are between 40% to 60% energy efficient, and when the waste heat is used to heat a building with a Cogeneration system (combined heat and power (CHP), the efficiency can react an increase of 80%.

Any portable application which use batteries can be powered, such as handheld devices (smartphones, laptops, tablets etc.), and also bigger applications such as portable power systems states Natural Resources Canada.

Cogeneration systems (CHP) are used to supply both heat and electricity to homes, offices, and factories. Also the waste heat during the summer months can go directly into the ground and provide cooling, while in the winter the waste heat can be pumped back into the building to provide heat.

Electricity generated from these  systems which is constant, can be sold back to the grid when the excess power is not being used, and at the same time the system can produce hot air and water from the waste heat.

Waste-water Treatment Plants and Low-quality gas from landfills can be used  to generate power, and to also lower methane emissions.

In California a 2.8 MW Fuel Cell Plant is said to be the largest of its kind.

Three hydrogen cars in select markets are publicly available, they are the Toyota Mirai, the  Hyundai ix35 FCEV and the Honda Clarity, but other companies are also working on developing hydrogen cars.

A study by the National Academy of Science (NAS) projected that these Vehicles by 2020 could add up to 2 Million light duty vehicles, and could grow rapidly to reach 25 Million by 2030.

Today the U.S. Department of Energy (DOE) along with its national laboratories, universities and industry partners, are working together to overcome critical technical obstructions to Fuel-Cell development such as cost, performance, and durability.