Geothermal Heat as been used since Paleolithic and Roman times, from hot springs for bathing and space heating. Heat stored close to the surface of the earth found in Thermal Wells and Springs with low to moderate temperatures, have tremendous potential for new direct-use applications.

Where shallow geothermal resources are found, water or steam from natural hot springs can be piped directly into radiators or heat ex-changers for process heat. High temperatures, or pressures from hydro-thermal reservoir fluids produced through wells, can generate electricity.

Geothermal reservoirs can provide direct heat for residential, industrial, and commercial uses such as home heating, offices, spas, green houses, fish farms, food processing facilities and many more applications. For heating homes and commercial operations, geothermal direct-use is cheaper than using traditional fuels. It's also very clean, producing next to nil air pollutants and in many cases none.

Where volcanic activities rises close to the earth's surface, regions which are near to tectonic boundaries have high heat temperatures that can be extracted from the ground, or groundwater. However, even where the ground is cold, 6 Meters (20 ft) beneath the surface of the earth, constant temperatures between 10 and 16 degrees (Celsius) (50 and 60 degrees (Fahrenheit) are maintained throughout the year. Like as in a cave, ground temperatures are warmer in the winter than in the air above it, and cooler in the summer, but this heat can be extracted with a geothermal pump. 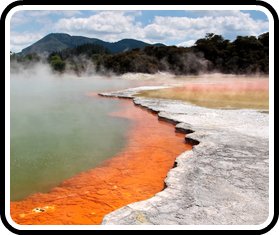 Geothermal pumps also known as Geo exchange, Earth-coupled, and Earth Energy Systems, are mostly called Ground Source Heat Pumps. These pumps can extract ground heat no matter how cold the source is, but they are more efficient if the source is warm, like stored heat energy from the soil or rock.

They also operate by circulating a refrigerant (a carrier fluid, usually a mixture of water and antifreeze) through closed pipe loops buried underground. When the fluid circulates underground it absorbs the heat, and as it returns, the warm fluid in the loop passes through the heat pump which extracts the heat from the fluid and then transfers it to the building for heating. For cooling, the process is reversed.

When exchanging heat with the ground, a Geothermal Pump is more energy-efficient because underground temperatures are more stable than air temperatures. These heat pumps can extract ground heat in the winter for heating, and transfer this heat back to the ground in the summer for cooling with  the help of Heat Ex-changers and Air Delivery Systems.

A Geothermal Pump System set-up costs are higher than Conventional Systems, but in 3 to 10 years energy savings can be returned.

Used for heating and cooling with energy produced by renewable sources, these Heat Pumps have significant emission reductions, and they have been also called the most energy-efficient, environmentally clean, and cost effective space conditioning systems available, by the US Environmental Agency (EPA).

Geothermal Heat Ex-changers consists of pipes which are buried underground and connected to a Heat Pump, and are usually constructed of rigid or semi-rigid plastic, plastic coated metal pipes, or other plastic pipes coated with Antimicrobial inner layers. These heat ex-changers are buried underground where the temperature of the earth's heat is typically 10 to 23 degrees Celsius (50-73 degrees Fahrenheit) all year round.

Ground Heat Ex-changers are used to deliver heat to Geothermal Pumps by the use of water, air, or antifreeze, and they can use shallow ground water with temperatures starting at (10-12 degrees Celsius or 50-54 degrees Fahrenheit) as a source of heat, and can also collect heat from hot and dry ground.

Direct Ex-changers systems circulate refrigerants in direct contact with the ground through a single loop. The refrigerant leaves the heat pump, circulates through a copper tube buried underground, and exchanges heat with the ground before returning to the pump, this is done without the use of an intermediate fluid. The elimination of a water pump, and of the water-to-refrigerant heat ex-changer, makes direct Geothermal Heat Pumps highly efficient.

Open Loop Ex-changers pump water from the surface or underground water sources such as Well water, a pond or a lake. The water is pumped into a heat pump, then the heat is extracted and the water is returned back to the source. The quality of the water is usually an issue with Open Loop ex-changers so the water should be checked for levels of salt, minerals, iron bacteria, and hydrogen sulfide.

Close Loop Ex-changers have two loops of piping buried underground where the refrigerant fluid (a liquid antifreeze solution) circulates continuously inside pipes, absorbing heat from the ground and then delivering it back to the heat pump. This heat is then used by the Air Distribution System to send warm air throughout the building, and for cooling, it is then reversed.

For a single house, a Geothermal Heat System that has maximum energy efficiency, an oversize Vertical Closed Loop would be more cost efficient.

Geothermal Heating Systems combined with Solar or other renewable energy, could be very economical since no conversion is needed, the Heat System would require less maintenance, thus making it highly efficient. According to the U.S. Environmental Protection Agency, Geothermal Exchange Systems saves homeowners on cooling and heating costs, compared to Conventional Systems. 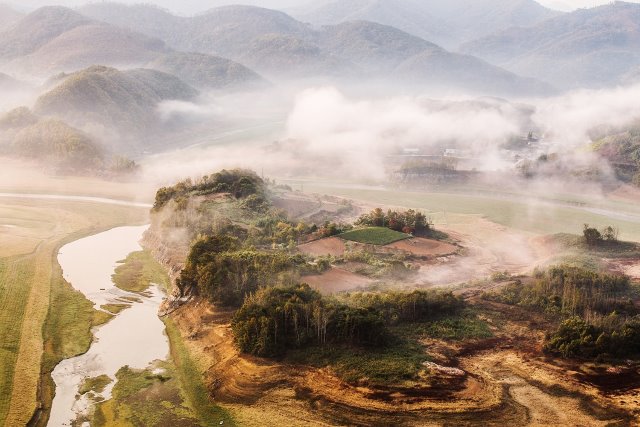