Geothermal Electricity: A Clean Source of Power with Limitless Resources

Geothermal Electricity  being available twenty-four hours a day, seven days a week, has ninety percent or higher average availability compared to coal plants. Also, this electrical power has many environmental advantages over conventional power plants, with one earth friendly advantage being that by using steam produced from Geothermal reservoirs, greenhouse emissions are very low, and next to nonexistent.

To be created Geothermal Electricity requires fluids, heat, and permeability, and hydro thermal systems contain all three key elements. Very hot water or steam at high temperatures, or pressures of 225-600 degrees Fahrenheit, are tapped from underground reservoirs which are drilled and brought to the surface by mile-or-more-deep wells. If sufficient fluids from these reservoirs are present, these fluids can be produced to generate electricity, or for process heat.

At high temperatures greater than 360 degrees Fahrenheit (182 Celsius), water is pumped under high pressure into a tank at the surface where the decrease in pressure causes the fluid to vaporize. The steam is then used to drive a turbine and power a generator to produce electricity, and any left over water or steam is then returned to the reservoir.  These are the most commonly used type of Geothermal Power Plants in operation today. 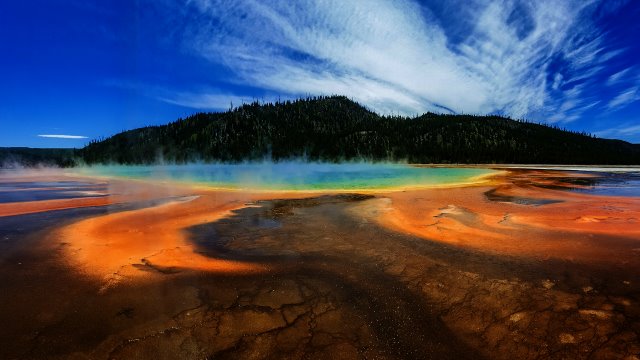 Binary Cycle Plants are different than Dry Steam and Flash Steam Systems in the way that, the fluid or steam never comes in contact with the turbine or the generator. Lower-temperature heat from geothermal reservoir fluids below 400 degrees Fahrenheit, and a second binary fluid (a working fluid) is passed through a heat exchanger, then the heat from the geothermal fluid causes the binary fluid to become steam which then drives a turbine, and powers a generator. The fluids that never come in contact with the working fluids(Binary fluids) is injected back into the ground, or reservoirs to be reheated.

Closed-loop Binary Cycle Systems virtually emit nothing in the atmosphere except water vapors. Being able to use resources below 400 degrees Fahrenheit, which are the most common geothermal resources, suggests that Geothermal Power Plants in the future will be Binary Cycle Power Plants.

The benefits of Geothermal Electricity is that it's renewable and can be produced consistently 24 hours a day, 7 days a week regardless of the weather conditions.  This eliminates the need for energy storage technologies, and it's also clean emitting no greenhouse gases.

Economically, well drilling and pipeline construction have a large up-front price, but cost vary greatly depending on geological and other conditions. Over time, once they are installed Geothermal Power Plants can provide inexpensive power.

Co-production with conventional fossil fuels, specifically with the Oil Industry is another unique factor to Geothermal. Enhanced Geothermal Systems risks associated with Hydro fracturing induced seismic, are low compared to natural earthquakes, and can be reduced by careful management and monitoring.

Future potential is great for Geothermal Power. A 2006 National Renewable Energy Laboratory (N R E L ) report, estimates that by 2025 more than 100,000 MW of Geothermal Electricity could be in production.